The creative juices are flowing....

I woke up one morning with a thought: I need to make Dream Catchers! This is not the first time I had had this thought.  I can recall being at a holiday party a couple of years ago, eavesdropping on a conversation about these dreamy little catchers, and before I knew it I was asking the woman to teach me how to make one.  It never panned out, as I left for Ecuador a short time later.  However, when the thought popped in this time I was listening, and the next thing I knew I was off to the store to get supplies.  I like things to be as authentic as possible, so I collected some branches while dog walking, and some feathers close to a house nearby that had these really neat looking birds.  After some trials and tribulations, I created my first Dream Catcher.

I have felt a connection to Native traditions for some time now, and I especially resonate with Dream Catchers, given my regular vivid dream recall coupled with my interest in symbolism and the sacred. 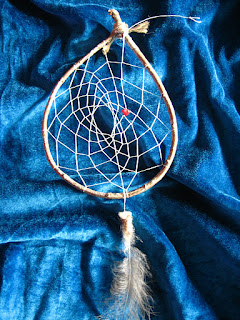 According to Native Americans, dreams that humans have while they sleep, are sent by sacred spirits as messages.  Their Legend says that the center of the Dream Catcher has a hole, and the good dreams are permitted to reach the sleeper through this hole in the web.  As for the bad dreams, the web traps them and they disappear at dawn with the first light. For this reason, dream catchers are supposed to be placed in an East facing window, so that when the first sun of the day appears the bad dreams are washed away.

The Ojibwe Tribe were apparently the very first people to make Dream Catchers as a way to protect their infants against bad dreams that could possibly come throughout the night.  They kind of symbolize a spider web, and this weave seems logical given their task of protection. 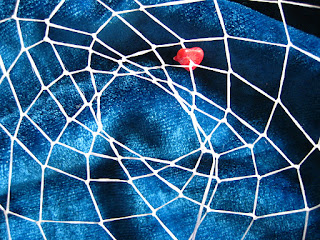 I hung my Dream Catcher on my bedroom door handle the first night, yes, this was before I was told they were supposed to hang in a window, regardless though, that night I had a powerful memorable dream.  My spirit was definitely sending me a message!